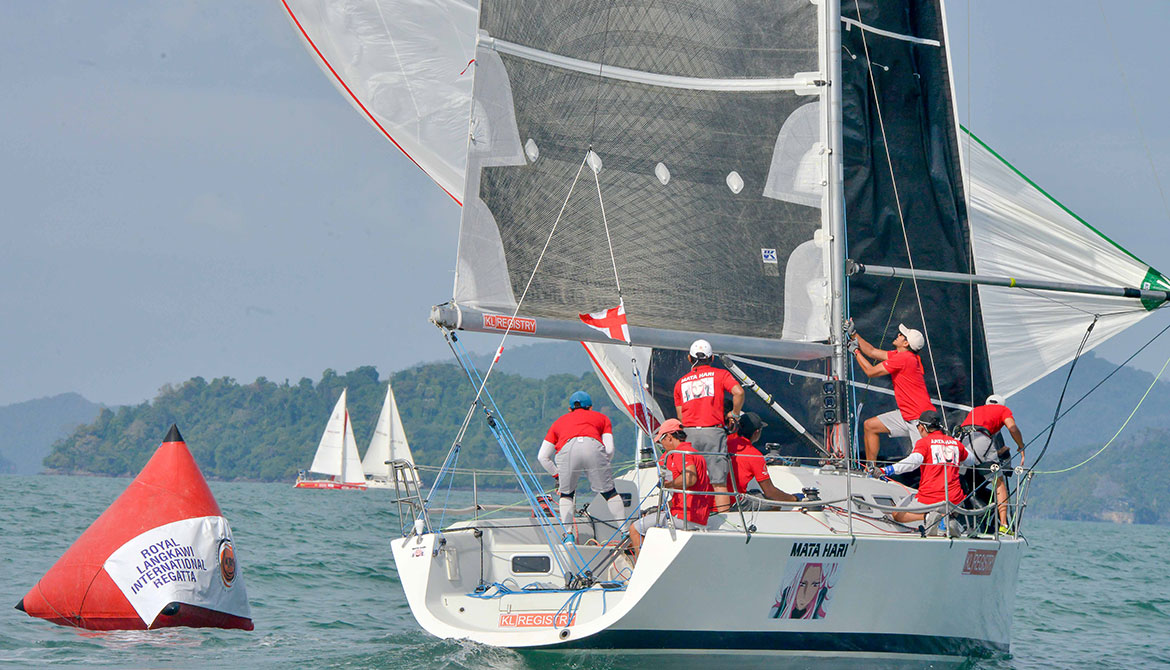 Langkawi, 13 January 2017 – After yesterday’s cancelled races, today Principal Race Officer Simon James took the decision to go to the east coast of Langkawi to ‘find wind’. It started promisingly with enough wind to set a course and the fleet finally got flagged off at 9.40 am with 6 knots of wind.

Although the wind slowed down later in the morning, sailors requested to run a second race which started at 11.45 am. During the second race the wind continued to fall off so there was no chance for a third race.

Newcomer Don Whitcraft’s TAH72 blitzed the course in the racing club again but Oi! skippered by Peter Ahern came close in the first race. THA72 finished the day ahead of Emagine and Oi!.

No change in the IRC1 class with Mata Hari keeping the lead followed by Insanity and PhPlus.

John Kara, skipper of Insanity racing in the IRC1 class, said “We were fortunate we had enough wind for two races today. Of course we would prefer stronger wind which would make us more competitive.” Insanity came second in all 6 races.

PHPlus’s skipper Aurelien Faugeres took it with humour. “We are slowly learning how to sail in Langkawi. We are improving every day but would like air conditioning”.

Jeremy Camps racing on 37 year old ‘Old Pulteney Blue Angel’, at 28 ft the smallest boat in the fleet, who has raced in the RLIR since its inauguration in 2003 said ” Given the wind condition it is the best regatta in the region with reasonable hotels, restaurants etc. I hope they keep it going”.

VG Offshore skippered by Ramasamy Menon is leading the Club class for the second day.

In the Sportsboats class Pine Pacific skippered by Ithanai Yingsiri made it back to the top followed by Burapha University Sailing Team and RSYC Team. Malaysian Armed Force Team 1 came 5th today after leading the class two days ago.

Mr Lennart Stegland, Managing Director of Volvo Car Malaysia and a sailor himself, said “Sailing is part of the lifestyle of Volvo and we have a long history with the Volvo Ocean Race, the most advanced sailing event around the world’. Volvo Malaysia is this year’s partner with the RLIR and is looking into the possibility of becoming a regular sponsor and partner of the RLIR.

The highlight of the day: a pod of 30 dolphins was spotted and seen by most sailors to their delight.