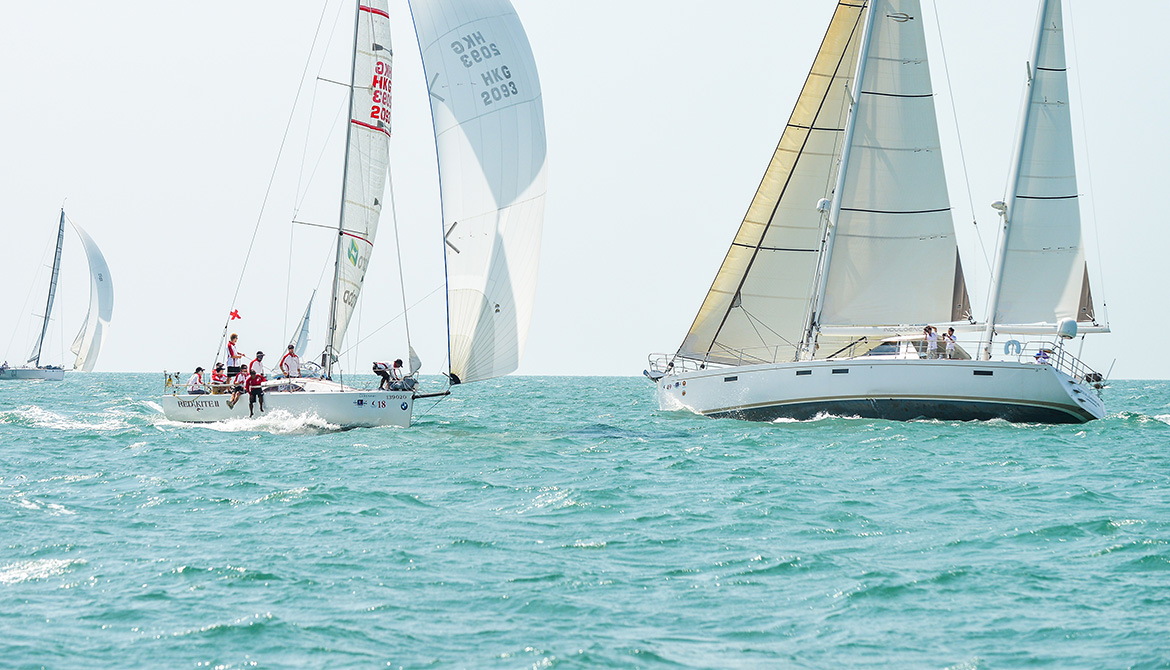 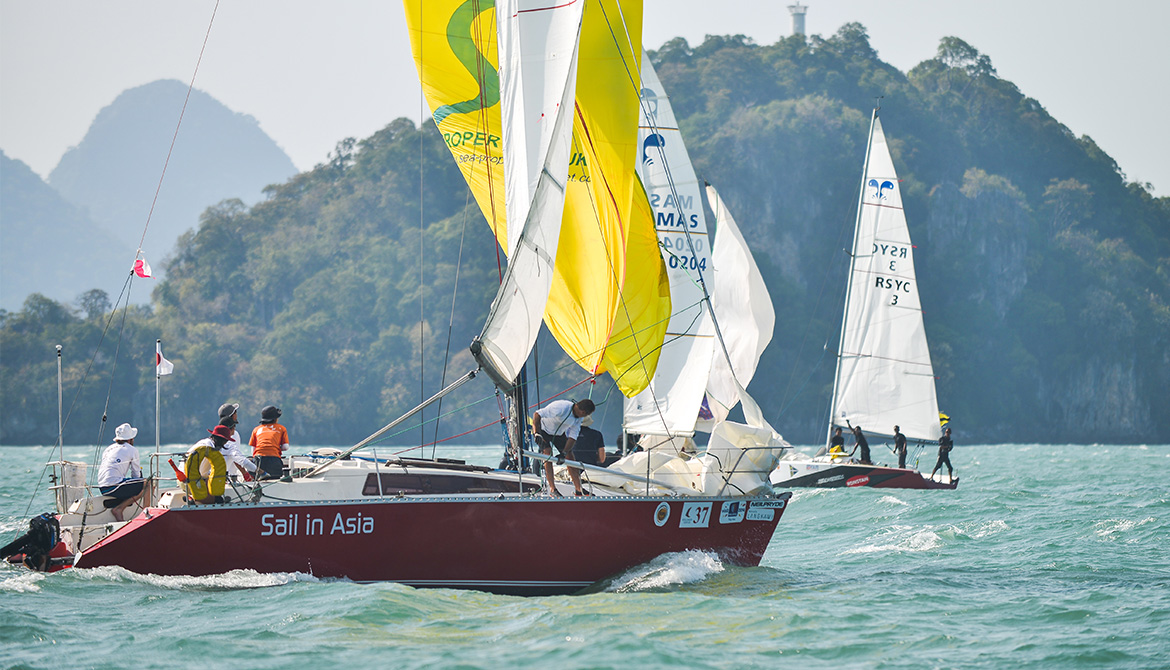 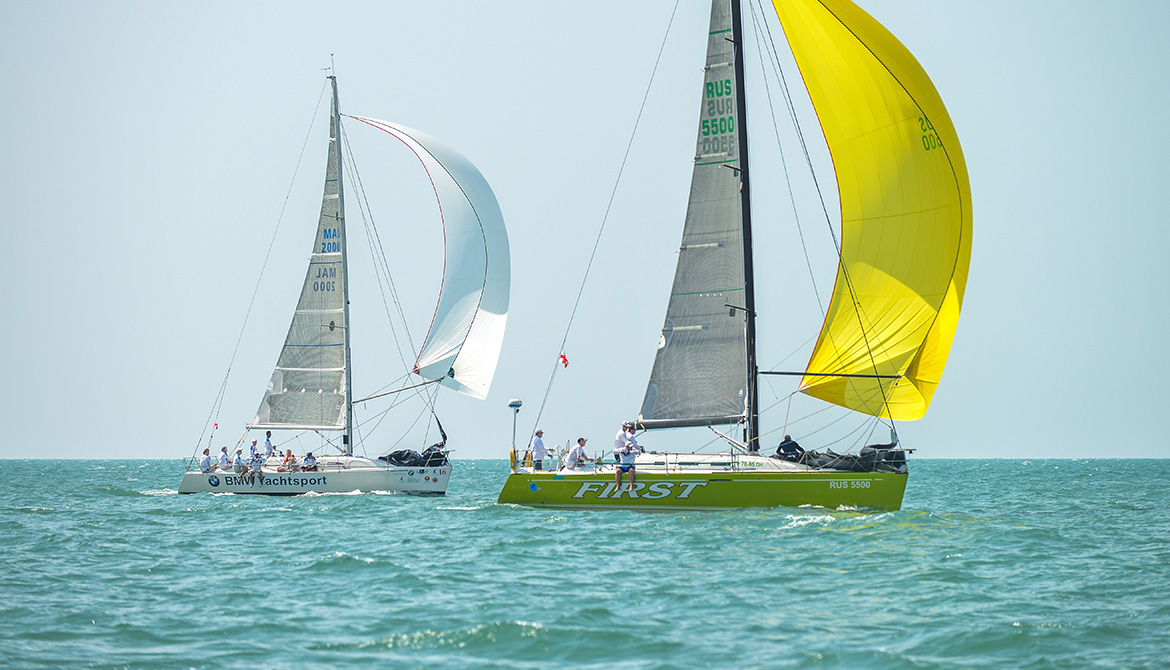 When The Wind Blows

“The pessimist complains about the wind;
The optimist expects it to change;
The realist trims the sails.”
–William Arthur Ward

For Race Day 4 of the 12th Royal Langkawi International Regatta 2014, the PRO had a few tricks up his sleeve to hand the racers and he used them well. The fleet was taken to the far western end of Bass Harbour and given instructions for two separate races. The Club Cruisers, Ocean Rovers and White Sail Class were to take the West Coast Course which would take them out the Western entrance, past Rebak Island to buoys off Borau Bay which they would round and then head back to Bass Harbour; a distance of 21 miles. Subsequently, Racing Class, IRC 1, IRC 2, Sport Boats and Multihulls would run a long Windward/Leeward course up Bass Harbour where they had plenty of room to maneuver. The tricky part was it was blowing 16 to 20 knots straight down the harbor. The yachts on the West Coast Course would have a downwind start which should add a little spice to the excitement.

The West Coast Course is something new this year and is similar to the Round the Island Race in that you probably need a bit of wind to make it work, since it’s on the leeward side of the island. Well, they certainly had the wind and seemed keen to go for it.

As the yachts gathered around the Start Boat, which after my hoorah about PA 53 yesterday was swapped in the middle of the night for a bit older and smaller version, PA 4, it was noticeable that yesterday’s wind had made an impression on the yachts; all were on reduced headsails. Today, they would have been very happy with their choice.

So, the first start, right on time, was a combined downwind start of the 13 yachts comprising Club Cruisers, Ocean Rovers and the White Sail Class. The start went well with no major problems although the boats were a bit spread out. PYTHEUS AURA managed to find the Start Boat and zipped through just before the next starting sequence, which was Racing Class. The flashy spinnakers made for a colorful display.

As the Racing Class was flagged off in the fresh breeze, close-hauled and racing for the black buoy 1.7 miles to windward, UTARID, KATSU and Oi! were declared OCS, on course side, and had to take another shot at crossing the line. KATSU, a little late to respond, wound up in the middle of the IRC 1 start which was now underway with FOXY LADY VI bounding ahead. FUJIN seemed a little late for that party but bounced across the line before the next sequence.

IRC 2 and the Sport Boats were up next in a combined start toward their windward buoy which was 1 mile up the course. It appeared to be just a wee bit bouncy for the PLATU’s, but they handled it well.

The Multihulls were also on the shorter windward course and were given a good start if a little spread out and although AFTERBURNER was slow off the start, she managed to lead the Class back in with A. CABRIOLET NINA in second place in Race One.

It was about this time that the Start Boat received the news that SABABA had retired from the race and shortly thereafter RUSALKA announced his retirement due to steering problems. Both yachts were just heading off on the West Coast Course.

The shorter windward course and the stiff breeze allowed IRC 2 and the Sport Boats to finish Race One in what was no doubt record time with PHOENIX taking the flag and ORION PACIFIC/FARRGO EXPRESS second. MYA-UITM led the Sport Boats back all in at little bunch and after the IRC 1 finish with FOXY LADY VI taking the honors and FUJIN second there were still Racing Class yachts on the course.

The PRO decided to send the Racers, IRC 1, IRC 2 and the Multihulls out on the West Coast course for Race 2 and since there were still Racing Class yachts on the course, he opted to start IRC 1, IRC 2 and the Multihulls before the Racers. Again, for the West Coast course, it was a downwind start. The wind was still blustery at 16-20 knots for the downwind start, but the canny yachtsmen were ready for it and the starts went without a hitch and the view of all the spinnakers together looked very impressive.

Not to be left out, the Sport Boats were given a new start and dispatched back up the course they had just finished, the shortened windward course. Again, in what could be record time, RSYC Setia West brought them to the finish line. The PLATU’s were then allowed a respite and sent back to the bar(n).

Not long after, the Club Class, Ocean Rover and White Sail Class yachts began showing up around the headland. First to arrive was ELENA, crossing the finish line with only a jib and a broken boom. The fifth yacht to arrive was SMYSTERY, sporting a gaping hole in her mainsail and was first over in the White Sail Class. EVALINE finished first for the Ocean Rovers and that took care of the First and only race of the day for those Classes. 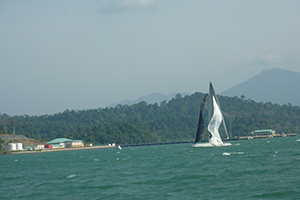 The yachts sent on the West Coast Course for Race 2 started arriving and fortunately no more sail rips or broken gear appeared to happen. I’m sure there was considerable strain considering the strength of the wind and the sea conditions but the yachts romped home in tact.

JELIK and Oi! led the Racing Class in; FOXY LADY VI and FUJIN were 1, 2 for the IRC 1 boats; PHOENIX and FAARGO EXPRESS out sailed the other IRC 2 yachts and AFTERBURNER and A. CABRIOLET NINA took the line ahead of the rest of the Multihulls.

Race Day 4, an exhilarating and perhaps a somewhat exhausting day for some will certainly go down as a windy and challenging day. Tomorrow, the last day of the 12th Royal Langkawi International Regatta calls for more of the same and should provide an exceptional and action filled finale to an already outstanding Regatta.