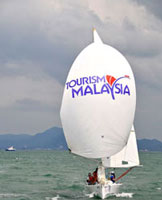 The 10th Annual Royal Langkawi International Regatta is slated to begin tomorrow, 10 January 2102. Although preparations for the Regatta have been ongoing for months, many features have been brought into final focus during the last few days.

Race Management Personnel, mostly volunteers from the yachting community in Langkawi, had briefing meetings on the 7th and 8th of January. Things moved into high gear today getting all gear and equipment ready and functional for the Start Boat, Pin Boat, and Mark Boats (4) for the practice races in Bass Harbor. 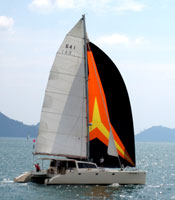 Likewise the Regatta Office was a hubbub of activities throughout the day. Hani was handling the registration process for participants, Carolyn was fielding all manner of questions from just about all involved factions, and Roberta, Pauline and Gudrun were passing out the race information packets, including social activity information, and memorabilia.

Meanwhile, David Richards was kept busy measuring various sails, Zack was directing staff with all sorts of Regatta preparation activities, and Simon James – PRO (Principal Race Officer) for the Regatta – was all over the place getting his ducks in a row in advance of the practice races in Bass Harbor this afternoon.

A number of Regatta participants sail their boats to Langkawi from Singapore or Thailand. Customs, Immigration, and Marine Department officials were on hand at the Yacht Club to take care of the Malaysian formalities for these boats.

Sailing in the Third Champagne Fun Run Feeder Race from Phuket were the multihulls MIND THE GAP, (James Wilding) and FANTASIA (Andrew Stransky). The only monohull joining this race was TANTRUM (Robertson Paridon). Arrival at Langkawi was at Telaga Harbor Park Marina where each yacht was presented with a bottle of champagne! Winners were: Fantasia for the multihulls, and Tantrum for monohulls. Perpetual trophies are new this year and will be inscribed with these winners names as well as those previous Champagne Fun Run winners. Sponsors for this event were the Ao Chalong Yacht Club in Phuket, Thailand, and Rubicon Reserve Wines (Langkawi).

Out on the water Monday afternoon the winds varied from 5 to 10 Knots in the early afternoon from mostly a NE direction. Winds piped up considerably later on, causing some interesting spinnaker gyrations! At first it appeared that only a few racers would show up for practice, but as it got closer to the 2 PM start a nice racing fleet had gathered. Nineteen boats maneuvered within their classes to take the starting line with flag and horn.

Of interest on the course were the two DK46 yachts newly launched in December and sailed by Malaysian Navy teams. URANUS skippered by Mohamad Razali Mansor, and UTARID with Ishak Jab provided some exciting moments of close racing as the teams vied for positions and victory.
Gusting winds of about 15 to 20 Knots filing in about 3 PM caught NIJINSKY (Jeff Harris) in a big time spinnaker broach. HOOLIGAN (Marcus Blackmore) had halyard trouble and sent a man aloft to sort it out. And sadly, Platu boat RQYS (RSYS/Angus Rankin) had a shroud let go and the mast crumpled in half. Sailing they’re supposed to do; swimming NOT – so you might want to ask MATA HARI (Vincent Chan) about that man that fell overboard! Fortunately, a lifeline was attatched, and a speedy pickup was achieved.