Around The Island Race – Day 3 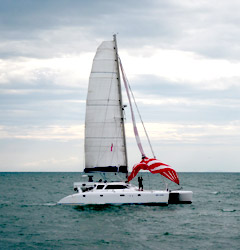 Despite the tender breezes at the Yacht Club this morning, the conditions outside the confines of the harbor were very good, with 12 to 15 Knot winds from the ENE and slight seas.

Today’s Around the Island Race was inaugurated in 2008 to provide our visiting yachtsmen with a chance to see some of the magnificent scenery of Langkawi’s ninety-nine tropical islands.

The volunteers on the Pin Boat agreed to set an early morning start line for the Club Cruising and Ocean Rover classes. Each boat could make its own start over the line anytime between 7:45 and 8:45am. Starts for all other classes began at the usual time of 9:30am. Early morning sunlight filtered through the clouds highlighting the boats, crews, and their sails as the yachts got away on a downwind start, spinnakers popping open in a colorful panorama. Well, OK SEA LEVEL (James Milsky) – yours didn’t exactly pop open on cue, did it!

By the time the Start Boat got underway to follow the racers down the course, the winds had driven the fleet right on toward the bottom tip of Langkawi. It looked like the winds had maintained strength all along the course so that some of the Club Cruising boats were already through the islands and marker gates and closing in toward the finish! A transit line was established between Start Boat and shore so that RASCAL (Gavin Welman) could take the horn at 11:04:18. Well done! Little by little the racing boats beat their way up Bass Harbor to the finish line. Because the fleet was quite spread out, there were no dramas at the pin end. For a moment it looked like Warisan Duyong (Tropical Yacht S/B) was going to steal across the line ahead of HI FI (Neil Pryde), but a burst of speed had HI FI surging speedily across first!

The last boat to finish crossed second before 2:00pm, making the Around the Island Race this year the fastest on record. Not only were the racers happy to be headed back to the Yacht Club at an early hour, so were the Race Committee members!